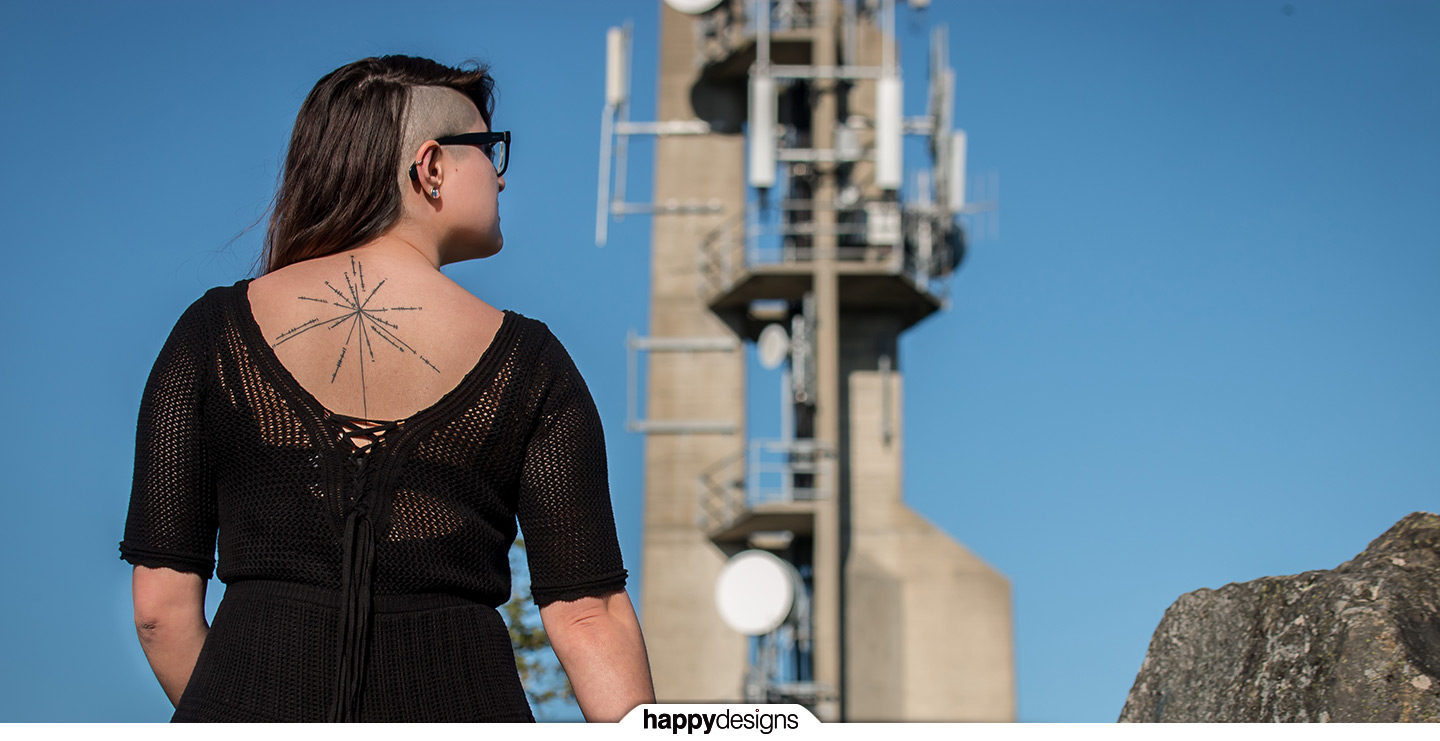 Happyfriends, meet Lucia (Spanish pronunciation with the stress on the second syllable: loo-SEE-ah). Lucia, meet my seven or so lovely and loyal website visitors.

Yet the frick again, I’ve waited until someone I’ve wanted to shoot with is about to leave the city, or the province, or the country, before I get off my butt and take their photos. At least I’m consistent.

Lucia and her guy will be moving to Europe next month, so I did my usual panic spaz and set up a shoot to capture her amazing pulsar map tattoo.

What’s a pulsar map? I’m gonna fail spectacularly at explaining this, but it’s a map, designed by Carl fricking Sagan, illustrating the relative position of the sun to the centre of the galaxy, along with the 14 pulsars closest to earth.

The map, along with diagrams of the hyperfine transition of neutral hydrogen (whatever the heck that is), the solar system, and figures of a male and female, are all components of the Pioneer plaque, plates of gold-anodized aluminum which made the trip into space attached to the Pioneer 10 (1972) and Pioneer 11 (1973) spacecraft to any show alien life which should happen upon them about us humans, and where we are in the galaxy.

Lucia is geek and proud, a gamer from way back, and even runs an Etsy store called Terminal 17 (“I was looking for something that sounded sci-fi”), from which she sells cool and fun jewelry and accessories (everything from gaming and comic book heroes to Nancy Drew and cats). She calls it “unique geek.”

In fact, she very cleverly wore some of her space earrings for the shoot! That particular pair isn’t available, but it goes a little something like this.

We shot at Summit Park, one of my favourite places to shoot, and it was no small coincidence that I choose this spot for her because of the somewhat-spacelike satellite dishes on the old CHEK TV tower.

Have ridiculous amounts of fun in Europe, Lucia! =)